Track and scenerytrainz forget. Age of Empires II: Definitive Edition. Is a huge buff as it allows you to advance earlier and save the cost by which you can make even more militia in dark age added with goths cheaper cost of infantry #3. Apr 30, 2020 @ 12:32pm Aztecs used to have free Loom instead of +50 starting gold.

The Truly Countless Bodies is among the rarest AoE2 DE achievements, and it's not an easy one. It requires you to win Attila's 5th mission in less than 30 minutes. Here's a simple, foolproof way to get it, in standard difficulty.

How to Get The Truly Countless Bodies Achievement

You start the mission with 3 peasants, one scout cavalry and 10 tarkans.
Right off the bat, I suggest you slow down the game in the menu, and opt for either slow or casual speed. This will let you micro your units and production more effectively, which is essential.
Once that's done, order your peasants to build four stables, a blacksmith (to research blast furnace and cavalry chain barding armor), a market (to sell your stone) and four more stables.
There's no time to build a real base and an economy: the more you wait, the harder the mission becomes, as the three AI you have to destroy also start with thousands of resources.
Meanwhile, send your tarkans and your scout to the north corner of the map, near the blue AI (western roman empire)'s base.

Your first stables should be ready before your starting force reaches blue's base. Immediatly add your stables to a key shortcut, set the rally point near the roman starting base, and start producing a lot of knights.
The goal now is to destroy blue before he gets out of hands. He starts at the imperial age and will upgrade his knights and longswords to cavaliers and champions pretty quickly. And build a ton of castles too pumping out lots of elite Cataphracts too. So you have to destroy him as soon as possible.
The problem is: he's got a lot of starting units. Enough to cripple or kill your tarkans. Thankfully, AoE2 DE AI isn't really smart.
The trick is to find a lone blue building or peasant, and to attack it with your scout cavalry, while your Tarkans wait in a safe place. The attack will trigger all blue units to attack your scout. Wait for the knights and longswords to be in range of your scout, and run him to red's base, who, hopefully, should have a castle by now. You can even order your scout to garrison into red's castle to save him.
Wait a few seconds, until blue units are far away, and immediatly attack blue's first TC with your Tarkans and the first knights who reached the area. Whenever a peasant try to garrison, snipe him. When the TC is damaged and peasants get out, try to kill all of them.
At the same time, have a couple knights run around, sniping every peasant trying to build a castle. It's likely the Romans already have one castle, but you should make sure they don't build any other.
When the first TC is down, run to the second one, to the west. Before attacking him, kill all peasants who are gathering wood nearby. Then destroy the TC. Blue should produce a few units, kill them so you don't take too much damage.
At that point, you should set your stables' (who should still be producing knights) rally point near the Alan's base, to the west. Not too close, so you knights don't aggro the AI, but close enough.
When the second blue TC is destroyed, have your knights search and destroy every blue peasant left. Luckily, blue doesn't seem to garrison them inside his castle, prefering to build stuff all the time. When he's left with only a few peasants, blue will destroy his buildings. It means he's gonna resign soon.

Stemp 3 : Taking Care of the Alans 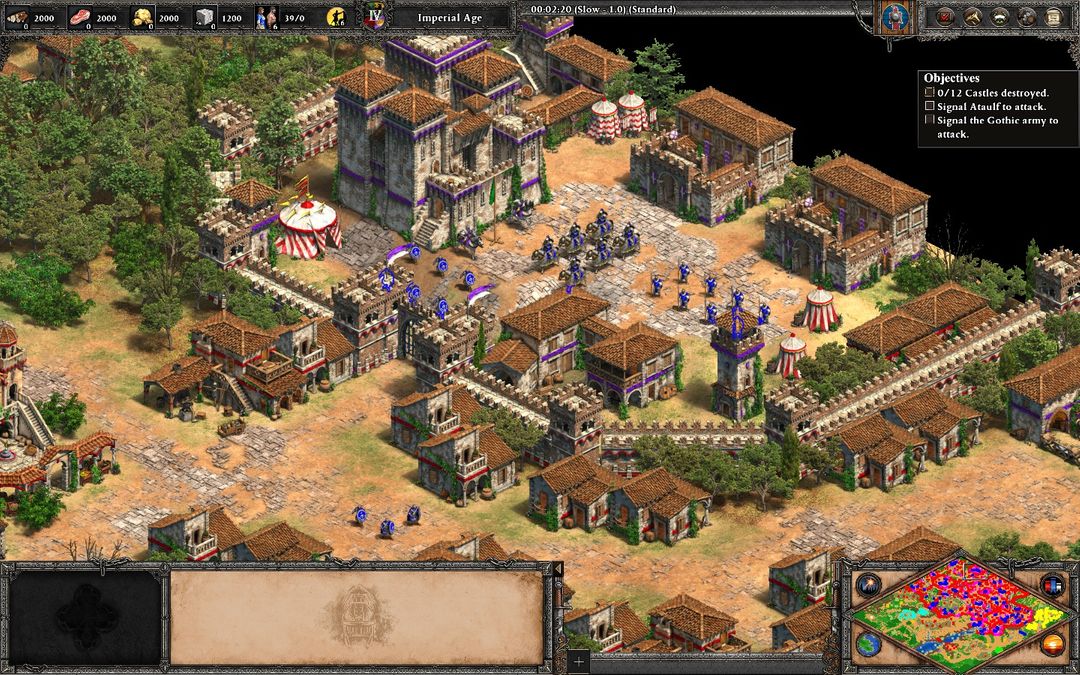 When you see all blue military buildings crumbling, it means blue is gone. Don't wait for him to resign (it can take up to a minute): gather your troops and send them to the south east of teal's (the Alans) base. You should now have about 20 or 30 knights, plus some Tarkans.
Teal has a siege workshop in the area. Attack it, to make teal attack you. He's got a lot of knights and horse archers, but hopefully, you have enough knights to win by a landslide.
Once that's done, leave the siege workshop alone, and attack the nearby TC. Repeat the good old process: kill as many peasants trying to garrison as possible. There's a castle nearby, that'll likely shoot at you. Leave it for now, and focus on the TC.
When it's destroyed, many remaining peasants will run to the north, where there's a second town center. Let them go. If you attack them, they'll chose the castle instead. Use that time to kill any horse archer or knight harrassing you, and run away from the castle. After a few seconds, attack the second TC, destroy it, and kill all peasant attempting to escape.
I suggest you now save your game. If you still have gold, keep producing knights, but set the rally point near the bridge, south west of your starting position. Note that you can sell stone (or even food) at the market to get a few more knights.
Now, here's the tricky part, that may make you lose the game: it's very likely that teal hide some peasants inside his castle anyway. If he doesn't destroy his building, it means you gotta kill those peasants. Hopefully, there's an easy way to do it: run away from teal's base, until the AI thinks it's secure. Now come back and kill all peasants. Usually, there are some gathering berries and cutting wood south of the castle, and some gathering gold near the second TC you destroyed.
If you don't succeed at killing all of them in a raiding run, load your game and try again, until you know where the peasants are and kill them all quickly.
This should prompt the Alan to destroy his building, meaning he's gonna resign soon.

Now, gather up all remaining units you have near the bridge I was talking about. You should have at least 60 knights by now and about 15 minutes left to finish the mission.
The issue is the last AI (green) is Goth, and spent the last 10 minutes producing pikemen and huskarls. Enough to give your army a lot of trouble. Hopefully, the trick we used to aggro all of blue's units work here to: have a knight (or your scout if he's still alive) cross the bridge, and look for a TC surrounded by green units. Attack a nearby building, and run away, but not too fast, making sure all green units are following you. 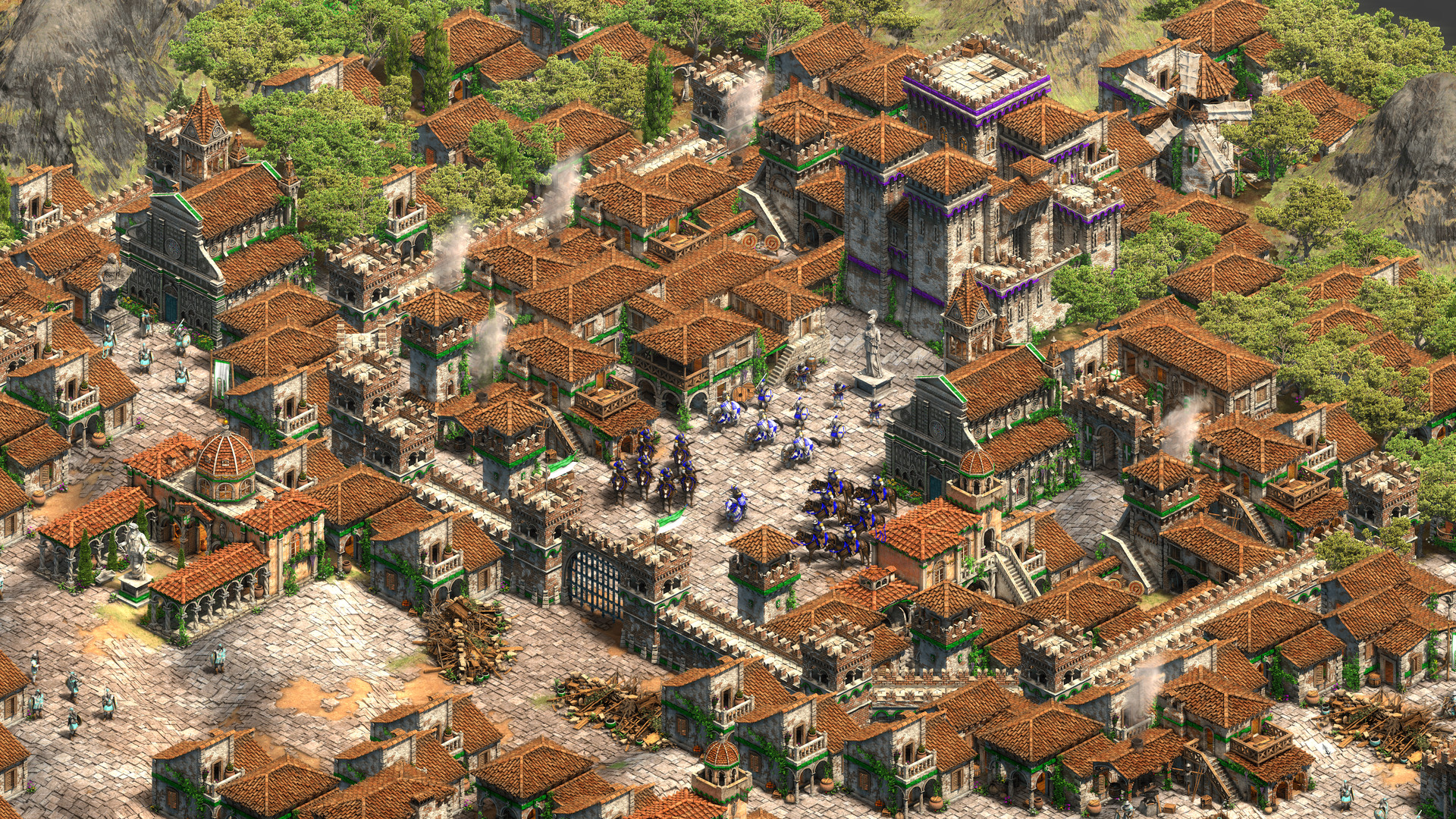 When you feel they're far enough for green's base, run in with your knights, snipe both TC, killing all peasants whenever you can. There shouldn't be any defender, so it's a cakewalk. It's possible red will send some trebuchets to help you. It's also possible green hides peasants in his castle, but you've got more than enough knights to destroy it now.
As usual, it may take up to a minute before green resign, after he's destroyed his buildings. But if all went well, you should still have plenty of time to get the achivement.